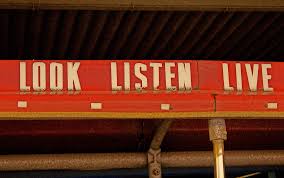 I heard the lady sitting next  to me, on the bus, say to her companion; “You live and learn.” I’ve heard that saying many times before. I’m certain I’ve said the exact same thing on a number of occasions. Who would disagree with the obvious? But we all know people who seem to be stuck. I’ve been there myself. Not able to extrapolate the gracious and generous message being sent to me.

The body is designed to heal itself. When it doesn’t, something has gone wrong. The argument is a strong one; most medical practices treat symptoms not causes. And the side affects of treatment can be dire. Symptoms are an invitation to change something we’re doing or not doing. Ignore the message and most likely we will receive a stronger one shortly.

When I joined the Marines, in 1974, I maximized the physical fitness test conducted in basic training before graduation. I was the only one in my unit to do so. I was considered undersized. So, they made me eat double portions to gain weight. I’ve often joked that the government is responsible for my undesirable growth later in life.

When my military service was over my physical activity diminished. I stayed  involved in sports, initially, but lifestyle changes slowly brought me to less and less exercise. I ignored my diet, eating whatever I wanted without regard for where I was headed. I didn’t heed the gentle signs my body was sending. It took a heart attack to get my full attention. Could it have happened if I did a better job of taking care of myself? Absolutely. But it is also a possibility that I could have prevented or delayed it.

Many good decisions follow bad ones. What if we made better choices in the first place?Part of our reality is the artificially induced connectedness of technology. For all of our efforts to gain intimacy through social media platforms we are more isolated than ever. We ignore the benefits of authentic relationships with other people and, more importantly, with ourselves. The feeling of missing out has, you guessed it, caused us to miss out. We don’t get quiet enough, long enough, to receive the vital signs of emptiness.

Feelings attracts thoughts that reinforce feelings. And feelings dictate outcomes. Positive thoughts, by nature, are trying to change the way we feel. If the feelings are dominate, the thoughts, no matter how noble, will fail to bring about difference. This understanding has changed my life. Nobody can make me feel anything I don’t agree with. If someone says something disparaging to me, and I think it’s true I will feel the negativity of what was said. But, if I know it’s not true, I’m empowered to not feel a thing.

THE POINT OF AN AHA

From childhood until this very moment I have received a continuous flow of Aha moments. Many of them never converted to defining moments. I’m driven to communicate. I will immediately start sharing any and every revelation that comes to me. Sharing is good. Right? I would give away what I captured in my mind before I captured it in my heart. The results were sometimes excruciating, as I watched the wisdom change the feeling in other people while my feeling remained the same.

I’ve lived much of my life feeling damaged. I held on to what wasn’t working with a better thought bouncing of the walls of my mind. Clinging to my feeling prevented the insight from taking root. Powerful thoughts, which were working to align me with truth (I’m not damaged) couldn’t become foundational because my feeling kept shooing them away. Core beliefs are not only what you think – they are what you feel, about you. If we don’t change our feeling our mind and heart will continue to be at odds with each other.

When we possess the feeling of what we want to obtain, as though we already have it, our thoughts will rush to accommodate us.

Oh what tangled webs we weave when, in fact, we are deceived. (slightly altered) I have an innate dislike for the saying: everything happens for a reason. It gets used like it sets us free from figuring out what we need to know. If we choose a conspiracy theory as our guide we insure a repetition of life experiences. If we can’t dissect what happens then what happens is meaningless.

Rejection is often redirection and not a denial. I’m now able to appreciate things that didn’t work out. I was trying to force things that were not meant for me. My desires were based on limited knowledge that led me to believe there was a singular way to go about things. That there was only one way to be in the world. What I was really doing was attempting to validate myself with infertile approval. I was sincere but confused.

The real detriment of comparison, is lose of identity. We’re subtly driven to be someone else because we think that’s the best version of ourselves. That’s just plain inaccurate. Our uniqueness is our assignment. It’s where we discover significance. I’ve wrestled with overwhelming disappointment because of the demeaning story I wrote, and lived out about myself. Good things are an indication of what’s in-store for us.

It it’s not fun, reconsider. We aren’t meant for hardship and struggle. The battle isn’t to acquire by force; It’s to cooperate with our purpose. From money issues to peace of mind the only conflict is what we believe (feeling + thought) about ourselves. We can separate from abuse if we are willing to stop abusing ourselves.

If I have to be you to be me I have a problem. The point of every message being sent to us is to ratify our reason for being here. Yes, if at first you don’t succeed, try, and try again. But, let’s not do it over and over without considering why we are doing it. Determination is not the same thing as stubbornness. What works and doesn’t work is very personal to each of us. Every one of us has a reservation to the flow of life. Our mission is to find it.

If we discriminate against ourselves we have, most assuredly, missed the point!

What is your greatest life lesson?