She is relieved as her husband leaves for work, and closes the door behind him. She turns off all electronics and spills into a chair at the kitchen table. Pulling her knees up to her chest, she folds her arms around her legs, and places her head on her curled up body.

Except for the pitter-patter of falling rain, she manages to capture the moment of silence she craved. Is it that big of a deal? She wondered. Am I being selfish? She asked herself. They both want children but can’t agree on the time. She spoke to herself without words, and grappled to understand the real source of her emptiness. Would a child solve her problem? Would a baby make her feel satisfied?

Looking up with wet and puffy eyes she acknowledges, she has a good life. Even an envious one. Several friends from her inner circle often shower her with compliments. She shakes her head, as if to answer the unspoken questions. She’s ashamed at her inability to be thankful. She’s where she dreamed of being and never imagined feeling this way.

They were young and just getting started. There were difficulties— you know, marriage changes things. They began in-the-hole, with school debt and credit card balances, but had more than most to start with. Tears run down the length of her face and hold steady at her chin. She isn’t aware of the invisible presence surrounding her, but Pantokrator is there. A tear departs the edge of her countenance. Pantokrator catches it in his hand . He will hold that teardrop until he can wipe all her tears away.

Pantokrator is as unique as his name. He’s a know-it-all, with a kind of humility seldom seen. Knowing her thoughts, before she chooses them, he directs the traffic in her mind. Standing beside her in her anguish, he sees her, feels her, knows her, and understands her. He can’t help himself. He’s concerned with her plight. With a translucent touch he strokes her hair and caresses her heart. Taking a deep breath, she exhales slow, and deliberate. She sighs in absolution, not knowing where her comfort is coming from.

She rises from her position of exhaustion, mesmerized at her sudden strength. Pantokrator smiles. He gets a kick out of being, “Johnny-on-the-spot!” Assured of a desirable outcome she’s determined to strengthen her resolve. She walks straight to the stereo and selects the song already at play in her head. She turns up the volume and set her feet to dancing.

Since she didn’t realize she had accepted Pantokrator’s request for a dance, he dances along with her, in secret. And he’s got  game- moves better than Jagger. She’s only suspect now, but he knows the joy forming inside of her. As she spins and twirls, his enthusiasm almost got the better of him. He has to restrain himself to hold his announcement, until the time is right. For now, he’s content for the two of them, to just dance in the Light.

While he is fully present with, Leelee Wintonia-Handman, Pantokrator is taking care of business elsewhere. It’s just the way he rolls. It’s part of his magic. Marty has been waiting in the wings for his next assignment. And when he gets the call, his entire community erupts in euphoria.

As Marty dances in the street, without restraint, he’s aware of the importance of his appointment. He understands the family business well. It’s about kids, always, about the kids. Whether its a newborn or a senior citizen, Fatherhood is the name of the game. And Marty is eager to get started.

He’s already packed and ready to go when he thinks of a few more questions. He approaches Perfect and Complete to inquire if he is forgetting anything, but answers his own questions before he asked them. Must be pre-conception jitters, he quipped. He knows – everything he needs, is already inside him. 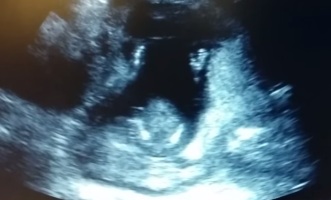 Standing at the edge of eternity, bag in hand, he awaits the call to board his flight. He fastens his seat-belt  in  preparation for takeoff. He removes both shoes, and opens his magazine to the first page, when the voice over the intercom says, prepare for landing. He thought to himself, I didn’t go anywhere. He takes his first step from timeless and pauses to identify all the foreign matter he senses. His natural warm light is greeted by cool darkness. Recognizing the squishy substance he is standing in, from biology 101, he takes in the grandeur. So this is what a womb looks like… Having no experience with the five senses, he pauses a minute, to explore each of them. Familiarizing himself with his new digs, Marty settles in, still feasting his eyes. Breaking the silence, with his all important whisper, he releases his first words; let the adventures begin!

Adventures in Marty will return next Friday!

4 thoughts on “Adventures in Marty!”